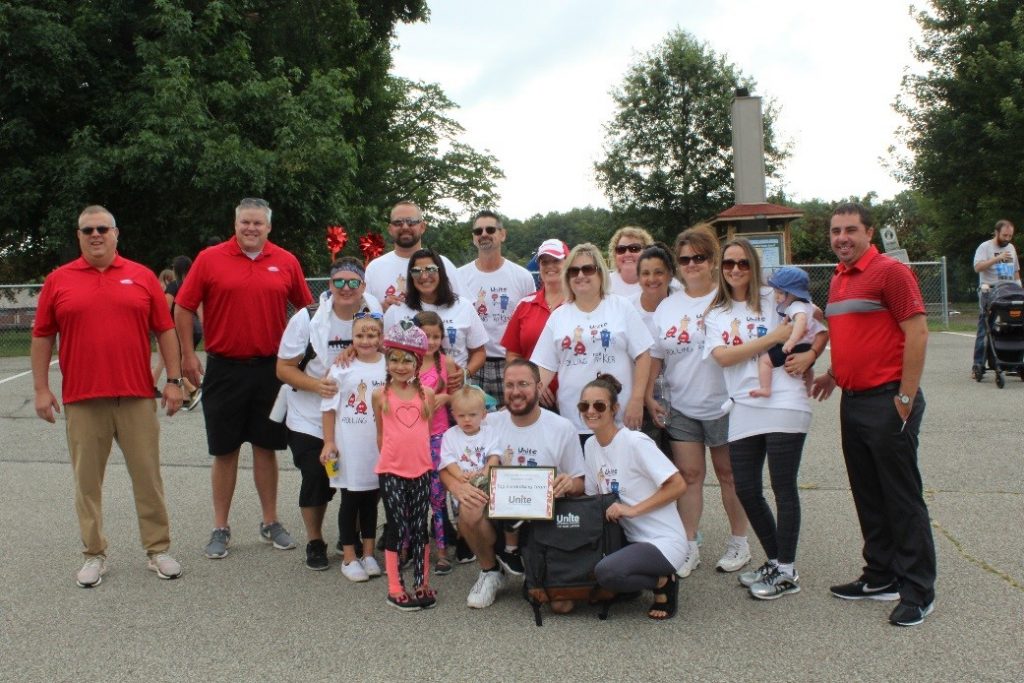 This year, our 11th Annual Unite for Bleeding Disorders Walk, 10th Annual Run for their Lives 5K, and 7th Semi-Annual Cornhole Tournament all moved to a brand new location! The festivities took place at the North Park Swimming Pool Lot! These events brought friends and families together to raise over $75,000 to support the bleeding disorders community in Western Pennsylvania. 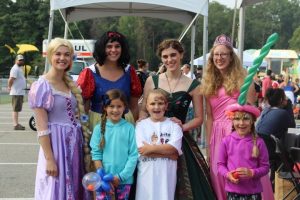 Snow White, Rapunzel, Sleeping Beauty, and Anna visited us at our KidsZone. They talked, colored, and did crafts with the children and families who stopped by. The KidsZone featured a face painter, a balloon artist, crafts, and fun games provided by Main Event.

There was also a DJ and a photo booth, so everyone could capture their favorite memories from the day.  Thank you to: First Class Entertainment for the DJ and Photo Booth services, Face Paint Pittsburgh, Dragonfly Balloons, Kona Ice Pittsburgh, WISH 99.7 Street Treat Patrol, Main Event, and our very talented princesses volunteers.

This day would not be possible without the support of our many team captains who rallied their runners and walkers and went above and beyond in all that they did. Thank you to all 24 of our Walk Teams! A special shout out to the teams who really went above and beyond and raised $1,000 or more:

Congratulations to our top fundraising team, Rolling for Ryker, who raised an incredible $9,300! Thank you to the Team Captain of Rolling for Ryker, and this year’s Walk Chair, Mindy Perry-Stern! This year marked the second walk Rolling for Ryker has participated in. Mindy has been an active member of the Chapter ever since her one-year-old son, Ryker, was diagnosed with Hemophilia A in 2017. She appeared on Wish 99.7 FM with WPCNHF’s Executive Director, Kara Dornish, and shared her story with Cris Winter. She also secured an interview on Star 100.7 FM with Kelly where she was able to promote the walk again! This year, Mindy’s walk team raffled off a pair of Steelers home game tickets and a Juju Smith-Schuster jersey. They sold tickets staring in February, 2019 and raised over $3,000! At the walk, Mindy recognized her father, Michael Perry, for selling a huge portion of the teams raffle tickets. We are so thankful for all of Mindy, and her teams, hard work and dedication to the entire bleeding disorders community. 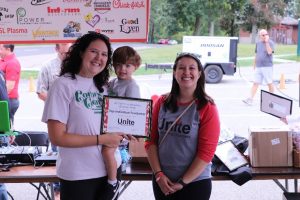 This year’s Top Individual Fundraiser was Emily Nikithser, who individually raised an amazing $2,000. Emily is the team captain of Conor’s Clan and won the Top Individual Fundraiser award last year. This year was their fourth walk to support Emily’s 4 year-old son, Conor. Emily did an incredible job holding two very successful fundraisers this year including Conor’s Clan’s Car Wash and Get Crafty with Conor’s Clan! On top of fundraising, Emily is an active member and volunteer’s her time at the Chapter. We are so incredibly thankful for Emily and her amazing team. 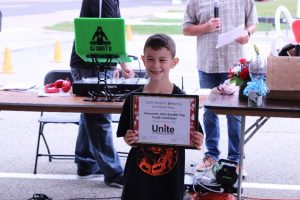 Finally, a big congratulations to the winner of the Awesome John Eyrolles Top Youth Fundraiser Award, Luke Miller, who raised an amazing $1,695! Luke is the inspiration for his walk team, Luke’s Lineup. This year marked their seventh walk. We are so thankful for Luke’s Lineup and everything they accomplished this year! Luke was diagnosed as a baby with severe hemophilia A, but his parents and his big brother are always there for him. This year, Luke’s Lineup had 66 people on their team! They also ran their first ever raffle, a wild-encounter trip to the zoo! They started selling tickets a month before the walk and were able to raise over $500. 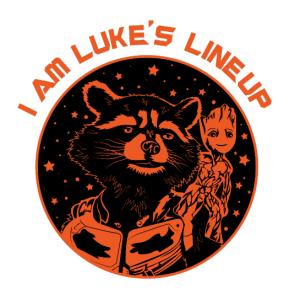 This year’s event had fabulous t-shirts designed by many of our walk teams.  Thank you to Jamie and Darin from Printeesweet for the printing of them, and for the many families that took the time to vote for their favorite t-shirt the day of our Walk.  Congratulations to Luke’s Lineup as the official Team T-shirt Winner, raising nearly $250! 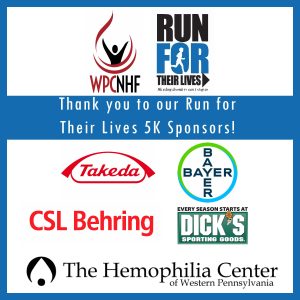 Thank you to Pro Bike + Run for the great job they did managing the Run for Their Lives 5k and to everyone who participated in the run. We are excited to announce that over $6,000 was raised from the Run and will stay local to support the members of WPCNHF.

Congratulations to the winners of the Run for Their Lives 5k!! 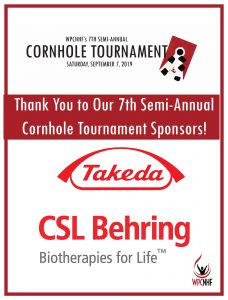 Lastly and most importantly, thank you to each and every one of you who came together with us to Unite for Bleeding Disorders. 100% of the money raised from the Walk, Run, and Cornhole Tournament stays local to promote patient advocacy and blood safety for everyone, support families in need by offering assistance with medical bills, travel, knee/elbow braces and other medical devices, provide medical ID jewelry to our members at no cost to them, provide local educational programming throughout the year, provide a support network to all our community members, and create and increase awareness about bleeding disorders.

Mark your calendar now for next year’s Unite for Bleeding Disorders Walk, Run For Their Lives 5k, and Cornhole Tournament taking place at the North Park Pool on Saturday, September 12, 2020!

We are hosting a WPCNHF take-over at Three Rivers Paintball’s Zombies of the Corn! Join us on October 20th, 2019 from 7 p.m. to 8:30 p.m. Enjoy a hay ride and shoot your way through a zombie infested field (where the zombies can’t shoot back!), try to escape the haunted compound, and see it you can make it out of the corn maze!  Coupons were passed out at the Walk for $2 off entrance to the haunting event and for every person who redeems the coupon, Three Rivers Paintball will donate $5 back to the chapter!  This event will sell out, so be sure to call Three Rivers Paintball at 724-775-6232 to reserve your spot! Be sure to check-in at the Chapter Table so we can keep track of how many people come to support WPCNHF!

Take A Bough is back on November 16, 2019! Join us for a wine-tasting and bid on beautifully decorated holiday trees, wreaths, and centerpieces. Tickets to our wine-tasting will be $25 and designated driver tickets are $10. Purchase tickets at bit.ly/takeabough!

Bowling for Bleeding Disorders will be taking place on Sunday, February 9, 2020 at Paradise Island Bowl. The cost is $25 and includes 3 hours of bowling, event t-shirt, shoe rental, pizza, wings, and unlimited soft drinks. Register your bowling teams at give.classy.org/bowling4bleeding!

You Can Help Make a Difference END_OF_DOCUMENT_TOKEN_TO_BE_REPLACED