One word – community. I think nowadays there is nothing more important than the simple fact that without community we, as a culture, have nothing. I was proud as a hemophiliac to see our bleeding disorder community come together for the Harrisburg Day 2014. I participated in the Harrisburg day event in the past and was happy to see many familiar faces moving our agenda forward. However, a more important fact is that many new faces were assisting in the effort.

I had the pleasure to speak with many elected officials that day. I felt that they were understanding of the issues facing patients within the bleeding disorder community. I made sure to explain that, as a patient with Hemophilia and age 31, I had personally seen the evolution of care from a time I dubbed the “dark ages” to today. Although there is still improvement needed, we have, without a doubt, made advances. The so called “dark ages” included a time of uncertainty dealing with HIV-AIDs and Hepatitis C scares, lack of access to care, and a far reaching misunderstanding of Hemophilia by the general public. I’m not going to continue on about the 80’s and 90’s, but I know for a fact it’s very important to keep things in a clear perspective. If we don’t remember the failings and inadequacies of the past and the gains that our hard work have achieved, then we may have a tendency to fall back, and I can say without a doubt, we never want to go back.

On a personal note, I come from a career background working in benefits verification and helping patients find the best possible costs in dealing with specialty drugs and their inherently higher than average costs. My experience includes helping the elderly to deal with high costs of tiered drugs and the Medicare part D “donut hole.” To quickly sum up the definition of “donut hole” is to say that it was a black hole where a patient hit a certain threshold of drug costs and was literally left to fall off a cliff into exorbitantly high medication costs. Luckily for our nation’s seniors, this was phased out giving the elderly th 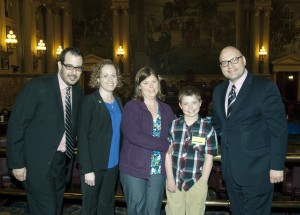 e freedom to not have to choose between buying groceries or medication. In effect, the playing field was leveled and that is what we need for patients with conditions such as those in the bleeding disorder community.

Patients are already experiencing similar effects to that of the dreaded “donut hole,” but now this plays out in a younger demographic with specialty pharmacy tiers. Call it what you want from tiers to cost sharing, etc., but the simple fact is that by virtue of being afflicted with a rare disease, patients and patient’s families are slammed with extreme costs. This occurs due to the classification of a prescription by the patient’s insurance company. Placing bleeding disorder drugs in a high cost tier forces patients to realize thousands upon thousands of dollars upfront and greatly unexpected costs.

It’s clear that, unless the patient recently hit the lottery, it isn’t realistic to slam an individual or family with these kinds of costs. It quite simply comes down to punitive treatment toward those with some of the most debilitating diseases and that is no way to do business. Like it or not, patients are largely a captive audience when it comes to the insurance they have. Since the insurance companies are just counting revenue, we need legislative efforts to show that patients are more than dollars and cents. This is the message that was given to the state officials, quite simply their constituents are under fire and need help. In a time when salaries fall far behind the cost of living, the last thing a family or a patient needs is a bill for thousands of dollars based on one month of their prescription needs.

Every time I have the honor to take part in these events, my morale is boosted by the simple realization that we all are so good at coming together to get the message out. I am hoping that our efforts weren’t in vain because I know that if our voices weren’t heard it won’t be for lack of effort on our group’s part. Each of us drove home the importance of what we were experiencing first hand in the arena of our care and dealing with countless insurance hurdles. We know what we go through as parents of a patient or those of us living with a bleeding disorder, but at Harrisburg Day 2014, we made sure to let our elected representatives know that we need help in these uphill battles. I know that with people like the Sen 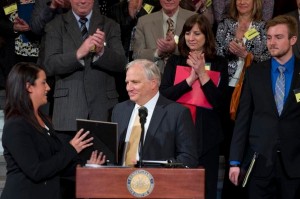 ators and Representatives I met that day we can work together to move forward with patient protections that are so dearly needed; not only for those with bleeding disorders, but for the millions of patients that have a need for specialty drugs.

On another important issue, we made sure to communicate to the elected officials that we had a certain level of funding from the state that was vital in helping the Hemophilia Treatment Centers. Many of the volunteers, including myself, thought there would not be any risk to this funding, but as it turns out this may not be the case. The funding level has remained at a constant level for quite a while and we weren’t asking for any additional money; however, it seems that our item may be cut in order to fund other items. I was really shocked to see that this would be under consideration since this funding is so vital to the treatment centers. We need to take time to reach out to our elected representatives and remind them that we need this funding.

You Can Help Make a Difference END_OF_DOCUMENT_TOKEN_TO_BE_REPLACED