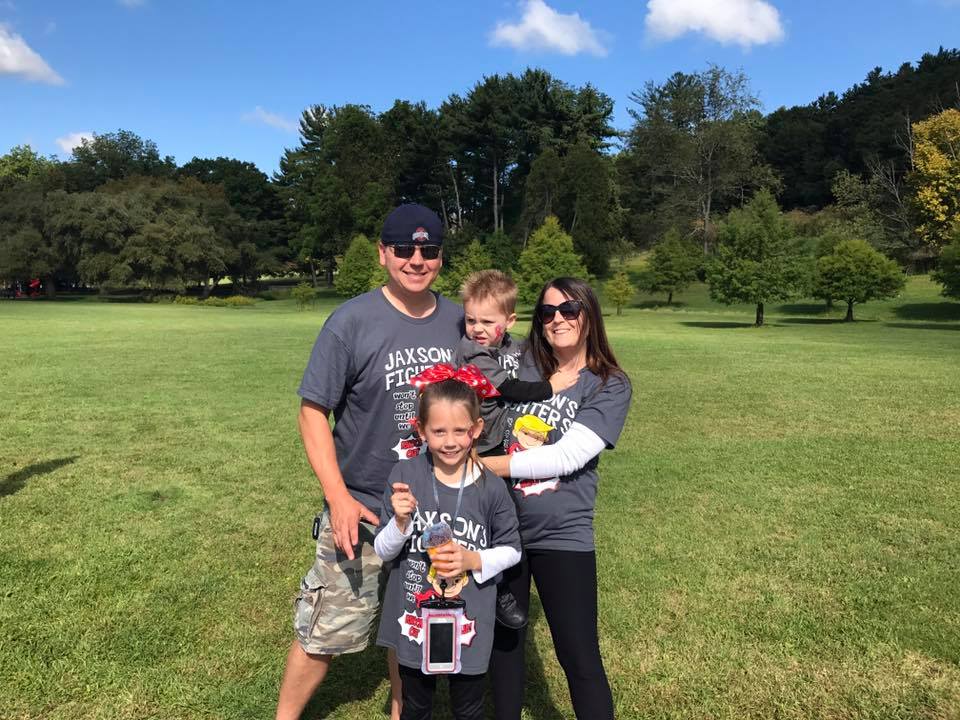 Team Jaxson was formed in August 2014, two months after Jaxson was diagnosed with Severe Type A Hemophilia. The Bakers heard about the 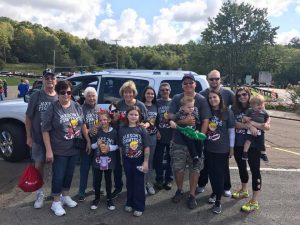 Hemophilia Walk and, being so new to the bleeding disorders community, knew that it was something that they wanted to support and get involved in. The Baker family consists of Josh, Kelly, Analise (9), and Jaxson (3) and their two dogs Bella and Leo. Team Jaxson is made up of their immediate family, grandparents, aunts, uncles, cousins and very close friends of Josh and Kelly. Since Jaxson’s diagnosis, Kelly takes pride in educating others about hemophilia and spreading awareness. Kelly is very passionate about fundraising and tries to think of new ideas to raise money for the Chapter each year.

This year, Team Jaxson held two very successful fundraisers to raise money for the Chapter. Their first event, which raised $384.98, was held at Chipotle in St. Clairsville, OH. Kelly decided to hold this fundraiser because Chipotle is very popular in her area and she heard other organizations had a lot of luck holding fundraisers with them.

Kelly used social media A LOT to get the word out about this event.  After creating an event page for the fundraiser on Facebook, Kelly and Josh invited everyone on their friends list to attend, which caused others to also share the event. When asked how she was able to rally participants and get 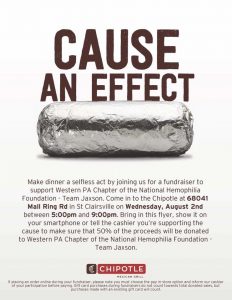 the community involved in her event, Kelly responded, “Our family and friends shared the event on Facebook, which led to people we didn’t even know sharing it as well. We had a lot of people showing the flyer at Chipotle and I honestly didn’t know them but they were there thanks to the support of our friends and family who also advertised the event for us.” Team Jaxson’s Chipotle fundraiser event was shared on Facebook so many times that it got the attention of another organization, A Special Wish-Ohio Valley Chapter, who grants wishes for children with life-threatening illnesses. This organization recently granted Jaxson’s wish of getting his very own swimming pool!

Kelly and Josh also printed flyers and distributed them to homes in their community, Jaxson’s school and daycare, the grocery store and gas station where they live, Analise’s dance studio, and at Wheeling Hospital when they took Jaxson to his treatments. They also handed out flyers to their co-workers and their neighbor who works at a pediatrician’s office handed them out there.

When asked what advice she would give to someone who wanted to hold a similar fundraiser, Kelly responded, “Don’t be hesitant to share too much on social media. Create the event and share it a couple times a week, and then every day prior to the event the week of. People get busy and this is a good reminder for them to attend. We also included the importance of the fundraiser and what the funds would go to, so people knew exactly where their support was going. Also, think of the resources you have to get the word out about your fundraiser, like we did with the hospital, school, daycare and our own community.”

For the past two years, Kelly has teamed up with the t-shirt printing company, Printeesweet, to hold a t-shirt fundraiser in the month of July. Kelly found that friends who were not able to make it to the Hemophilia Walk still wanted team t-shirts to show their support for Jaxson. As Kelly said, “We found people like to have something where they can show their support for Jaxson. They are able to order online and I delivered to those who live locally, so they didn’t have to pay shipping. But this is also great for those who have friends and family throughout the country, because they can have their t-shirts shipped to them.”

This year, Kelly created a Facebook event for the Team Jaxson T-Shirts and invited her friends list. She included a photo of the t-shirt so people knew 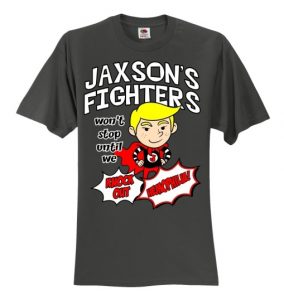 exactly what they would be ordering. She shared the event frequently and posted reminders as to how many days were left in the fundraiser, to push urgency in getting the orders in. When asked what advice she would give others who want to hold a similar fundraiser, Kelly responded, “Make sure you have it early enough that the shirts are delivered before the walk, so those who can’t be there, are able to support you wherever they are.” Team Jaxson raised $245 from their t-shirt fundraiser all of which will stay local to support the members of the Western PA Chapter of the National Hemophilia Foundation.

You Can Help Make a Difference END_OF_DOCUMENT_TOKEN_TO_BE_REPLACED