The RED TIE CHALLENGE is a movement created by the bleeding disorders community and their advocates at the National Hemophilia Foundation (NHF) to start a conversation about inheritable bleeding disorders and support for all people living with bleeding disorders around the world.  More than three million Americans have either hemophilia, von Willebrand disease or rare factor deficiencies – all of which: prevent the blood from clotting normally; can result in extended bleeding after injury, surgery or trauma; and can be fatal if not treated effectively.  The red tie symbolizes the blood ties that bind our community.  Get a red tie and record your best tie look, while pledging to support the bleeding disorders community, and challenging a few friends, too! Then post your video with #RedTieChallenge and think about making a donation at redtiechallenge.org. Be creative and have fun! 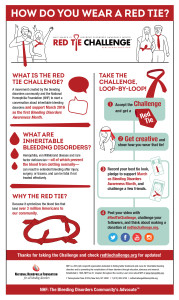 You Can Help Make a Difference END_OF_DOCUMENT_TOKEN_TO_BE_REPLACED