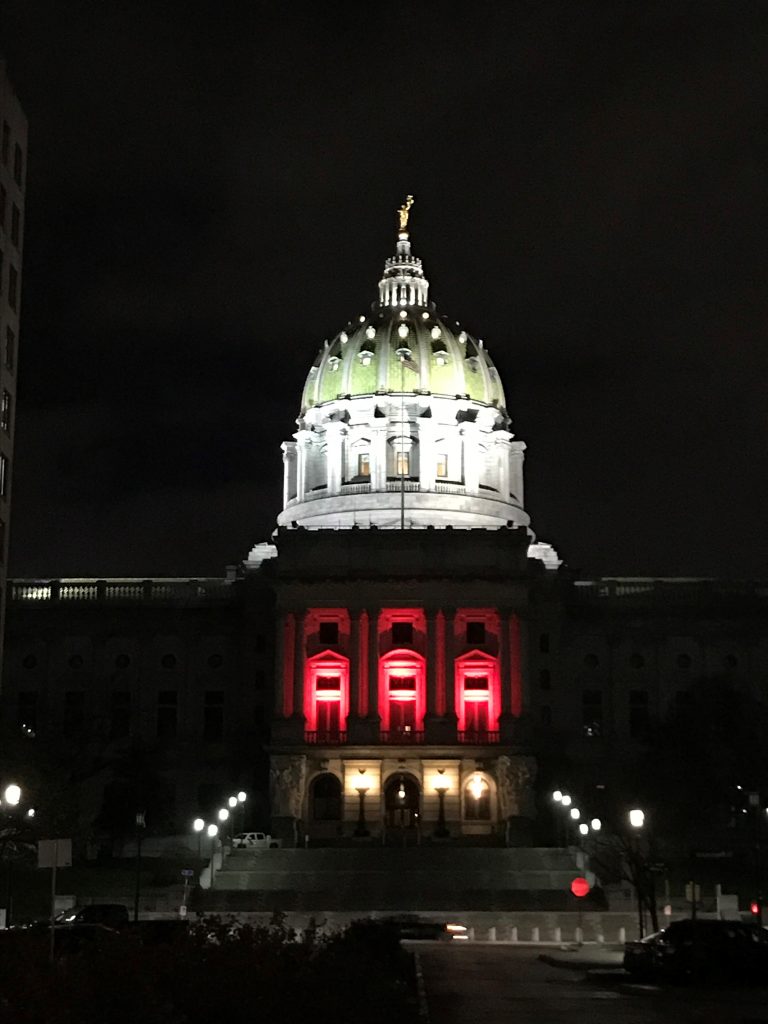 HARRISBURG/PHILADELPHIA/PITTSBURGH – Saturday, April 17, 2021 is “World Hemophilia Day,” which is an annual international awareness day for hemophilia and other bleeding disorders.  Since 1989, World Hemophilia Day is the day the whole bleeding disorders community comes together to celebrate the continuous advances in treatment while raising awareness and bringing understanding and attention to the issues related to proper care to the wider public.

To help raise awareness of hemophilia and other rare bleeding disorders, the State Capitol Dome in Harrisburg will be lit in red on Thursday, April 15, while other landmarks across Pennsylvania will follow on Saturday, April 17, 2021. In Pittsburgh, landmarks to be lit red include the Pittsburgh’s City-County Building, Gulf Tower, Koppers Building, Fifth Avenue Place spire, and Heinz Hall will light their garden plaza waterfall red. In Philadelphia Boathouse Row, FMC Tower, and Cira Center will be lit red and there will be a scrolling message across the PECO Building. Moreover, SteelStacks in Bethlehem will also be lit red. The theme this year is “Adapting to change – sustaining care in a new world.” This important event is about bringing the global bleeding disorders community together. With the COVID-19 pandemic having a major impact on people with a bleeding disorder, that objective has never been more important.

Hemophilia is a rare genetic bleeding disorder where blood does not clot properly causing people to bleed longer and have difficulty healing from external and internal injuries.  It is estimated that more than 400,000 people worldwide are living with hemophilia, with 20,000 of those people living in the United States.

The seven Pennsylvania HTCs are critical to the 3,000 Pennsylvanians who receive care at these facilities.  Without this support, Pennsylvania will incur approximately 5x more costs for these citizens, from emergency and inappropriate care via Medicaid and lost tax revenue from those who become unable to remain gainfully employed.  The Hemophilia Program saves Pennsylvania lives and saves Pennsylvania money.

The Centers for Disease Control and Prevention (CDC) has studied outcomes of patients treated at hemophilia treatment centers in the U.S. for more than 40 years.  These CDC studies demonstrate a 40% reduction in mortality and medical complications in patients who receive their care at an HTC compared with those followed by hematologists outside of this network.  The overall costs of care are reduced as well.

“There are approximately 6.9 million people worldwide with a bleeding disorder and 75% of them don’t know it.  World Hemophilia Day gives us an opportunity to increase awareness and educate people about bleeding disorders which we hope will lead to proper diagnoses and treatment,” said Dornish.

Additional information and resources for World Hemophilia Day can be found at: www.wfh.org/en/whd.

For more information on how you can get involved, please go to:

The Western Pennsylvania Chapter of the National Hemophilia Foundation at https://wpbdf.org/

You Can Help Make a Difference END_OF_DOCUMENT_TOKEN_TO_BE_REPLACED